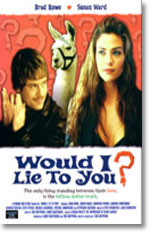 Would I Lie To You 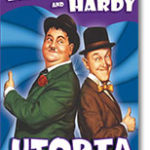 Title:   Would I Lie To You

Paul Del Mar (Brad Rowe) is a wealthy high tech mogul who’s looking for romance but has trouble trusting that women are interested in more than his money.

Pretending to be an average working class guy named Ernest, he meets the woman of his dreams (Susan Ward), but is unable to explain to her exactly who he really is. Complicating matters is Guy Montgomery (Jonathan Penner), a wily con artist who appropriates Paul’s “Ernest” scheme in order to bag the luscious Sophie (Samaire Armstrong), who insists he prove his mettle before she will link up with him romantically.

Soon, mistaken identity is taken to new heights, and things quickly go south for Paul. Add Olivia’s over-protective mother, a randy reverend, a pent up governess and an amorous llama as just a few characters who complicate Paul’s well-intentioned quest in this romantic screwball farce inspired by Oscar Wilde’s “The Importance of Being Earnest”.