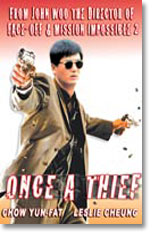 Out For A Kill

Title:   Once A Thief

They only stop to reload.

Joe (Chow), Jim (Leslie Cheung, Happy Together) and Cherie (Cherie Chung) have been partners in crime ever since their childhoods spent on the streets stealing to survive. Now world-class art thieves, their relationships and lives are put on the line when they agree to one last mission: steal a multi-million dollar painting for a mysterious client who’s bent on revenge.