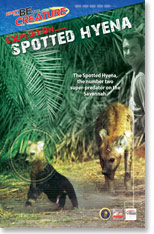 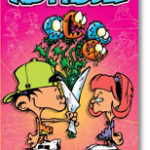 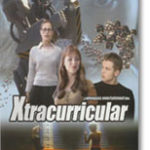 What is it like to prowl with a pride of hungry lions, run with a pack of African wild dogs, or go on patrol with a pod of killer whales, Find out as award-winning wildlife filmmakers Chris and Martin Kratt get up close and personal with fascinating animals to show you what it’s like to Be The Creature.

Featuring exciting expeditions of this great hit series from the National Geographic Channel, the Kratts offer an exhilarating, refreshingly unique way to observe and understand animal behavior.Whether you,re living with Alaska Brown bears or getting a manatee’s-eyeview of Florida waterways, each new adventure offers a surprising perspective on some of our planet’s most extraordinary animals.

The Kratts explore the dangerous balance between predator and prey when they travel to Kenya, Africa to find out what it takes to be a Spotted Hyena. The Spotted Hyena faces off against their arch rival and supreme predator, the lion during a daily battle for food on the same turf.

Even though Spotted Hyenas are commonly thought of as mangy scavengers, these crafty creatures are inventive and versatile survivors able to hunt, scavenge and even steal kills from other predators including lions in order to keep the clan alive.