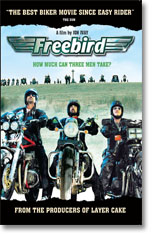 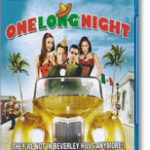 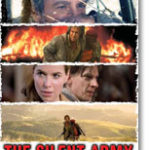 A fresh new comedy from the producers of Layer Cake.

Three London motorcycle couriers Fred (Gary Stretch), Tyg (Geoff Bell) and Grouch (Phil Daniels) set off from the capital in search of an elusive hippy and his cannabis farm in the Welsh mountains.

Originally intended as a nice weekend in the country, Fred has now found himself making a promise to his old friend the Chairman that whatever situations arise he will not return empty handed. Grouch has also made a promise that come Monday morning he’ll be moving himself and his belongings into his new found love Lucinda’s flat, and finally making an attempt at the world of serious relationships.

As for Tyg, no such pact. This is a man who’s never been further than the outskirts of London, and as far as he’s concerned an industrial unit near Heathrow Airport is pretty much the back of beyond. No, Tyg’s out to explore; to broaden his horizons; to lose any ignorance and soak up the hospitality of another nation. But, what are those wild beast noises coming from the woods and why are there two gangs of bikers in the area about to settle an old score.

Throw in a seven foot, masked, lovesick Russian wrestler and things could really get out of hand. That said, it may also have something to do with the wild mushrooms they had for breakfast. It’s a three and a half hour journey from London to the Welsh mountains, but for Fred, Tyg and Grouch it’s just about to turn into the trip of a lifetime.